The next AGM of the Association will be on
Sunday, August 31, 2008 at 2:00 PM, at the
Watsons Corners Hall. Check in for property
owners will start at 1:30 PM. Although the
meeting is open to all, voting will be restricted
to one vote per property owner, with voting
cards. Please pick up your card before the
meeting starts at 2:00 PM.

The annual dues of $20 may be paid at the
meeting with a receipt being sent out with the
October newsletter.

The history and development of the Patterson
Lake area was researched and written by
Lorne Bowerman for inclusion in the Lake
Management Plan. Parts of it will be used in
the newsletters as there is much general
interest in the subject. This newsletter answers
why we are called Patterson Lake.

The European settlement of the area started in
1812 when the British Government designated
all of Lanark County as a potential settlement
land for European immigrant settlers. With
the establishment of Perth as a military town
in 1816, Lanark Township, Dalhousie
Township and North Sherbrooke Township
were opened for even greater settlement in 1820.

The first wave of settlers to the area were
Scots from Glasgow and Lanarkshire around
1820. Lanarkshire is the area next to Glasgow
in Scotland. Glasgow is on the River Clyde.
In the 1830s and 1840s a wave of Irish
settlers arrived. Although the Scottish and
Irish settlers tried to open up the land, much
of the terrain was not conducive to farming,
and in the end many ended up in timber
related trades. Much of the land returned to
native forests.

One of the earliest records of the area is
Smith’s 1846 Canadian Gazetteer, which
gives an interesting description of the
electoral district of Bathurst, which today we
would normally call a riding.

http://www.censusfinder.com/ontario-canada-census-records4.htm
BATHURST DISTRICT Consists of the
counties of Lanark and Renfrew, which are
united so far as relates to representation in
the Legislative Assembly, and return one
member”.

DALHOUSIE. A Township in the Bathurst
District: is bounded on the north-east by the
township of Lanark; on the north-west by
Levant; on the south-west by Sherbrooke;
and on the south-east by Bathurst. In
Dalhousie 23,440 acres are taken up, 8,112*
of which are under cultivation. Two small
branches of the River Clyde stretch across
the north of the township, and the north
branch of the Mississippi runs through the
south of the township from west to east. At its
entrance into the township it expands into a
lake, containing about 1,200 acres, and its
course is very tortuous and irregular. Several
small lakes are scattered over the township.
The base of a large portion of the north and
east of the township is marble of different
shades of colour, varying from pure white to
dark grey. In Dalhousie 17,200 acres of
Crown lands are open for sale, at 8 shillings
per acre. In the township are one grist and
two saw mills. Population in 1842 : 1,258.
Ratable property in the township : £17,601.
* These include the township of Levant, no
separate assessment having been made.

In the 1901 Census, the name of Lanark
(North/Nord) and Lanark (South/Sud) is used
to describe the political division at the time.
Dalhousie Township was in Lanark North.

Patterson Lake lies within the Township of
Dalhousie in Lanark County in Eastern
Ontario. The lake straddles Concession 5 on
the eastern end, Concession 6 in the middle,
and Concession 7 on the western end. In a
north-south division of surveyed land, Lot 15
is on the northern side, Lot 14 in the middle
section and Lot 13 on the southern side. The
lake is positioned on an angle, with the
western end higher and the eastern end lower,
on the square grid of the concessions and lots
layout. Note that each lot is 200 acres, or 100
acres on the east half and 100 acres on the
west half. Legal descriptions may say West
half Lot 15, or part of West half Lot 15 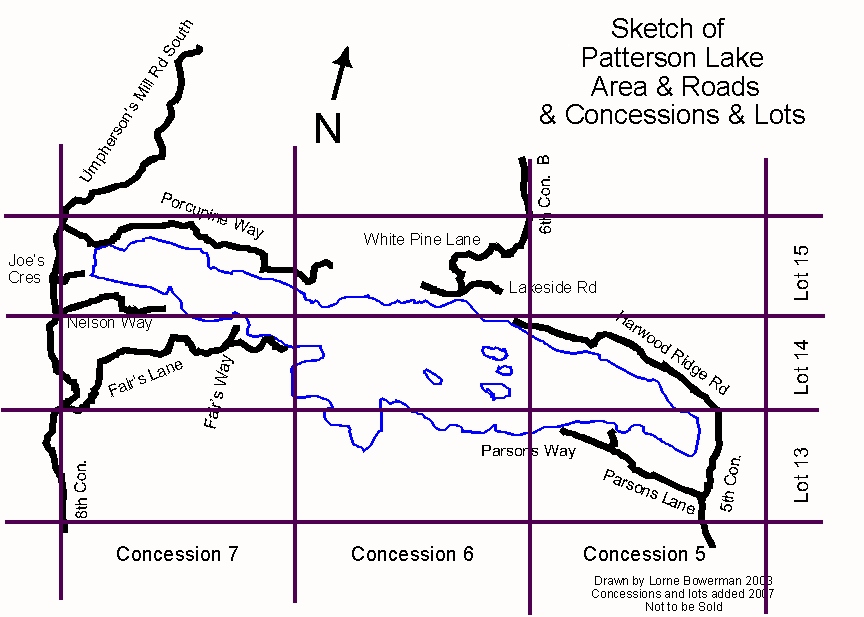 Concession 8 is also
important to Patterson
Lake because the Purdons settled there.
Concession 8 starts just a short distance from
the end of the lake, and is on the western side
of what we would call today the 8th
Concession and Umpherson Mills Rd South.

The man who lent his name to Patterson Lake
was Archie Patterson. He is listed in the
Settlers to Lanark County as arriving in 1821
and settling in Concession 6, Lot 13W, which
would put him just below the large bay on the
south shore of Patterson Lake. The record is
contained in:.

Patterson Archibald Dalhousie 6 13W 7 26
1821 (July 26, 1821 – which appears to be the
date that a settler was “located”, i.e. allocated
land. The reference is not clear on the
meaning.). A good guess would be that he
came in the first wave of Scots from Glasgow
and Lanarkshire.

Further evidence that he was there is a record
of burial sites on Concession 6, Lot 13, of
Dalhousie Township. This would put the
burial site just south of the bay. The
notations are “M.P 1925.” and “Believed to
be a child of a Patterson Family”.

Keith Thompson who lists the burial site said
that he has never found the site. His record is
at:

Other burials on Concession 6, Lot 13W are
James Hay Fair, born April 17, 1785, died
1854 and his wife, Jane Watson, born 1806,
died 1862. Apparently there is a plaque
marking the graves. Keith Thomson noted
that apparently there are five burial plots at
this site. The record is at:

Archie Patterson’s land was Concession 6, Lot
13W. If the Patterson child were buried there
in 1825, and the Fairs were buried there in
1854 and 1862, and if there are five at this
site, then it strongly suggests that part of the
land was considered a cemetery at that time. It
would not be typical to bury all over the place.
It would be far more likely to have a place set
aside for burials. A good example from
another place is Albury Cemetery in Prince
Edward County. From family tradition and
records, the land was given in 1825 for a
Church and a burial ground. But by 1825
there had been three recorded burials, (the first
in 1812), in what would become the cemetery.
These three show up in the proper place in a
cemetery plot layout. It is a mystery still
today. (http://www.bowerman.ca/albury/).

It is not beyond reason that there is a pioneer
cemetery there containing the graves of the
Patterson family, the Fair family, and Mary
from Mary’s Island. It would be very useful to
find this pioneer cemetery and have it properly
located using a GPS. Any takers? Phone
Lorne at 613-278-2813 or 613-225-7904.

Do not miss the connection with Fairs Creek,
Fairs Way, Fairs Lane, and Nelsons (Fair)
Way.

Another well know name found in the same
settlers list as Archie Patterson is:

The H. Belden Atlas of Lanark County in
1880 shows a stylized map of the lake with the
title of Patterson’s Lake. There were three
men listed as farmers with acreage around the
lake. These were James Reid on the north
eastern side, David Machan on the north
western side, and Donald Purdon on the
western end. The details are:

A voters’ list dated June 13, 1905 gives a
listing for the Lake. These would be only
property owners and it would be their
residences so if any had a cottage, it would
not be recorded. The details are:

The 1918 Dalhousie Township Directory
provides the next set of data.

Hugh Harper is not listed in this 1918
Directory.

The most noticeable missing piece of data is
the farmstead of Archie Patterson. The 1880,
1905, and 1918 do not contain any listing for
anyone on Concession 6 Lot 13W.

On the positive side, the most consistent data
of long loyalty to the area are the Purdons.

The Unusual Year at the Lake

It has been an unusual year:

The Creek (and Lake) Bed

While doing some research for the water level
part of the Lake Management Plan, Lorne,
Connie, and Joy Bowerman and Trevor Dee
did sampling of the bottom of Fairs Creek on
the lake side of the Creek. It ties back to the
question of a possible change of lake level
with the installation of the culverts, first in
1972, and then the present ones probably in
the late 1970s. We had a few surprises.

The apparent bottom for most of the creek is
certainly not the actual bottom. At the creek
mouth the bottom was 101″ with a visual
bottom of 27″. After the visual bottom, there
is 53″ of floc, then 21″ of fine light gray
“mud” at the bottom that looks like clay. But
it is not clay. And it is not sand. Our best
guess was that it is ground up
limestone/marble leftover from the Ice Age.
It vigorously reacts with acetic acid to form a
new granular brownish coloured compound.
MVC’s Doug Nuttall and Susan Lee agreed
with our guess. They added that the gray
colour was the colour of marble in our area.

On our way back, we took a sample from off
the dock at 151 Lakeside Rd where it looked
like sand or ground up shells. But it turned
out to be about 18″ of the same “mud”.

Interesting to say the least..

Please send your cheque to our Treasurer at
the address below. Make cheques payable to
the Patterson Lake Association. :Receipts
will be sent out in Newsletters.

If you happen to pay twice in one year, (and
that has happened), do not worry. You will
be credited with the $20, and it will be
applied as dues for the next year or years.
You will only pay once per year.