We have had considerable discussion over the
past two years about retaining about 8″ more
water depth in the lake during the Summer
months. We had finally reached a point where
we thought we could ask the Township to
request approval for a barrier in front of the
culverts. The Township of course owns the road
over Fairs Creek and therefore must be the ones
to initiate any action. Our request was sent on
to the Township and passed Committee stage.
However, when it came up at full Council, three
property owners raised objections. Rather than
get into a debate in front of the whole world, the
Association decided it would go along with the
motion to table the request until we could
demonstrate that we had the support of 50% plus
one of the lake property owners.

We can certainly demonstrate that we had the
support of the road association representatives
on the Lake Association. But that does not
necessarily mean that we had the support of the
majority of the property owners because we
could not demonstrate that the tie-in between the
representatives and the road association was
firm and had been done properly. In our present
structure, we are always open to anyone to claim
that we are not democratic because we are not
individual property based. We need to move on.

Lacking a member based organization, the Lake
Association decided to conduct a Survey of lake
property owners on the proposal to retain 8″
more water depth during the summer months.
The forms will be passed out and collected at
our road meetings during the summer. They are
also available on our website at the Water Level
button.

There are many examples of lake associations
that are based on membership of lake property
owners. Basically, a meeting is called of
property owners and an organization is set-up to
meet the need. This implies annual meetings,
membership dues, lists of members, financial
reports, an executive, an auditor, etc. It also
implies that membership would be open to all
property owners and that the failure to join by
any property owner would simply mean that his
or her voice would not be heard.

We have about 110 properties on the lake roads.
What is a bit different about Patterson Lake is
that we are broken up into six different areas
which for the want of a better term we call road
areas or road associations. Any structure has to
recognize these six different areas. Any lake
association would not last very long if it were
not broad based. Would there be much support
for a lake association where the majority of the
executive came from one road association? We
doubt it. So we must ensure that we draw
evenly from all the road areas. The road areas
also have to realize that to have a voice they
must have a representative on a lake association.
The way we are clustered means that any four
road associations could represent the majority of
the owners on Patterson Lake.

We are working on the structure of a new
organization. A draft of the latest version is up
on our Lake Association website.

The founding meeting of a new Patterson Lake
Association is called for Sunday, September 3,
2006 at 2:00 PM at the Watsons Corners Hall.
All property owners on a road associated with
Patterson Lake or persons who own property that
has shoreline on Patterson Lake are invited to
attend. An AGM button has been added to the website with a link to the Agenda.

A constitution will be confirmed. An executive
will be elected. A fee structure will be put in
place. Other things as needed will be discussed.

Changes in Our Road Representatives

Our present organization is made up of
representatives from the six different road areas.
We started meeting about two years ago after a
meeting was called at the Robertson Lake
Snowmobile Club to discuss a potential problem
of commercial development on Patterson Lake.
We are sorry to lose two original members from
the Committee: Bill Brooks from the Porcupine
Road area; and Dave MacCrimmon from the
Hardwood Ridge Road area. We thank both Bill
and Dave for their hard work for the Lake. On
the bright side, we are pleased to welcome Jack
Hobbs and Ted Manning, who will replace BIll
and Dave respectively.

Another original member was Martyn Howard
from the Parsons Way/Lane area. He was
replaced late last year by Kathleen Sullivan who
became our President last fall. We regret that
Kathleen was forced to step aside last month
because of family pressures. We need a new rep
from that area. There is little glory in it, but it is
a good job and gives you a chance to meet some
great people from around the Lake.

Lorne Bowerman will serve as President
until the founding meeting in September of our
new organization.

If you really want a hot debate, try whether a
lake association should be incorporated, or
whether it should have third party liability
insurance. We seem to fall on both sides of
these subject.

Incorporation puts a buffer zone between any
legal action by anyone and the executive. If an
organization is incorporated, then any legal
action must be against the corporation and not
an individual executive member. The only thing
at risk is the assets of the incorporated
organization. However as must be added
always, the consequences of wrongful and
unlawful acts or deeds will always put an
individual at risk whether incorporated or not.

After a serious look, and some serious
Googleing, we have to conclude that
incorporation is no big deal. There are plenty of
examples around and something like a lake
organization can be done for about $500. So if
you divide our number of property owners into
the amount needed, it would cost us about $5
each, and that is a one time cost. Forget the
arguments! We will move on incorporation of
the new association and get on with some
serious business.

The same argument can be advanced for
insurance. If we are looking at $500 annually,
then again $5 per property owner would do the
job.

During our last meeting on April 23 on Parsons
Way, the meeting dissolved into exclamations of
wonderment and joy. No, someone did not do
anything marvellous or make an astounding
speech. We broke up to look at a pair of Tundra
Swans which swam in toward the shore and
acted like they owned the place. You could go
down to the shore to get a photo or a better look,
and instead of taking off, they swam over to
have a better look at us. Impressive. None of us
had seen these swans on the lake in our time
here. By the way, if you are of riper years and
an old time birder, the Tundras used to be called
Whistling Swans. It turns out that there have
been quite a few sightings in the Ottawa area
this spring. 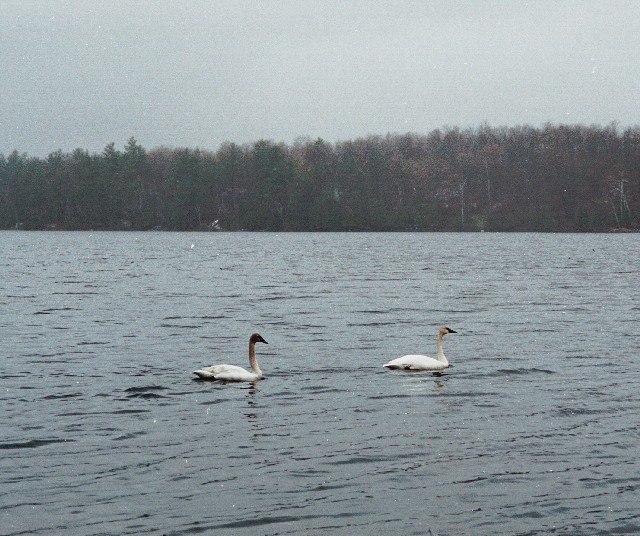 Photo taken by Larry Heide at his shoreline.
Newsletter

This Newsletter was produced by Lorne
Bowerman. Comments, suggestions, or articles
are welcome. (I live in hope!)

The next newsletter will be published in
September, and I hope it will be filled with news
of our new Association.