Help us keep Patterson Lake the way we all
want it. A meeting will be held on Saturday,
June 13 at 2 PM at the hall in Watson’s Corners.
All lake residents are invited to spend a few
hours to help us define the key elements of the
Lake Management Plan. Please come and let us
know what you want in the Plan and what are
the key values you want to make sure are
conserved.

Patterson Lake remains one of the cleanest and
most pleasant lakes in Eastern Ontario. Over
the last two years your Lake Association, with
help from many members, has developed a
thorough background on the lake. It includes a
history of the lake, documentation of plant,
animal and fish species in and near the Lake,
exploration of the history of water management
on the lake, the monitoring of water quality and
quantity and the documentation of how we use
the lake. The results of these are posted on the
lake website. See the sections under LMP (Lake
Management Plan) and Lake Data at our site at
www.pattersonlake.ca.

The Association is particularly grateful to Lorne
Bowerman for his extensive work regarding the
natural and human history of the lake which can
be found on this site. The Association has also
polled all permanent and seasonal residents
regarding their main concerns about the state of
the lake and its future. These will inform any
future discussions on the content and elements
of the Lake Management Plan.

Now that we have accumulated the factual
information, we enter the next phase of
development of the Lake Management Plan and
we wish to involve everyone on the lake to
make sure that nothing is missed. The
Association proposes to hold two short
workshops this summer to help advance the
Plan.

The first, to be held in June, will involve small
groups discussing what they want in the plan
and then sharing them with each other and the
Lake Association executive. The results of this
meeting will be put together and provided back
to the participants to make sure that nothing is
missed.

The second meeting will take place at the
Annual General Meeting in September where
again small groups will be asked to work on
each of the key issues which have been
identified, and to try to define solutions or
areas of concern which will need to be
addressed in the Lake Management Plan. We
will also invite some experts from the
Conservation Authority and other key players
to be in attendance and participate.

We hope that you have a wonderful summer
and find the time to help us put in place a Plan
which will conserve and sustain the things
which make Patterson Lake such a wonderful
part of the world.

There are major changes to the Mining Act in
Ontario going on now. The Minister
announced that for Southern Ontario the law
will be changed and those who own surface
rights will also own the mineral rights. (Correction on publishing to the web:
Not so! There is no unification of rights.). It may
change but that is the intent of the legislation.
Certainly one thing is consistent in the
announcements. No longer will anyone whose
has the mineral rights to your property have the
right to stake claims on property where he or
she does not have the surface rights.

Better still, go to the Patterson Lake website,
click the Mineral Rights button and go from
there.

If you want a lively discussion, raise the subject
of summer water level on Patterson Lake. There
is no arguments over the fall and spring water
levels: in the fall there is agreement that the
culverts should be kept completely open to drain
the increased fall precipitation; in the spring the
culverts have to be kept open to let as much
water as possible, from the snow melt and
spring rains, leave the lake quickly to protect the
Concession 5 road over the culverts, some low
lying properties, and the shoreline for the entire
lake.

Longtime lake residents help us understand the
progression of crossings over Fairs Creek, the
only outlet for the lake. At first there was no
crossing. In a 1934 air photo, discussed later,
there is nothing over the creek. Then probably
in the late 1960s a bridge made of logs was
constructed providing crude access to the north
side of the lake. The length of the logs is not
known as we have no data to indicate the width
or depth of the creek at that time. The next
crossing installed in 1972 was two 24″ culverts,
then at some time in the late 1970s the present
two 36″ culverts were installed as the 24″
culverts were probably too small to carry the
spring flow.

In this paper, we will refer to the level of the
lake in terms of its distance above or below the
bottom of the entry side of the north culvert of
the present 36″ culverts, (it is the lower of the
two culverts). As it is extremely difficult to get
an accurate reading on a regular basis from a
flowing culvert, a
submerged base
measurement rock
was established in
1995 by
Lorne Bowerman
on a submerged
rock in the lake
which can be regularly measured. 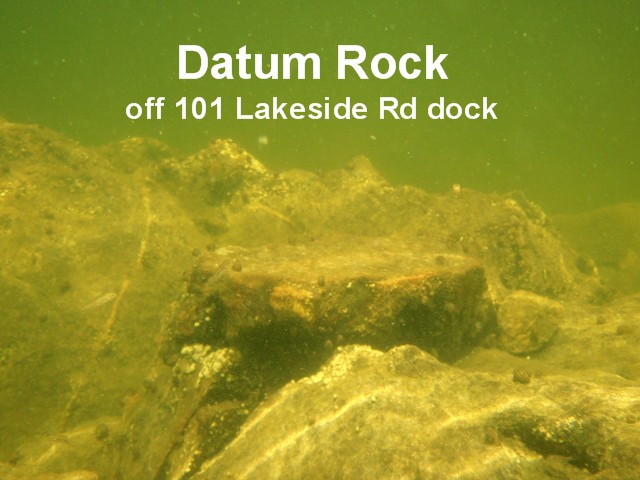 When water
level is even with the bottom of the culvert, the
top of the rock is eight inches under the water.
The rock is used to measure depth.

This 12″ long by 8″ wide base measurement
rock is a flat topped anvil shaped protrusion
from a large rock off the Crown point close to
the 6th Concession line, which is probably
better known today as 101 Lakeside Rd. The
accuracy in reference to the north culvert was
established by measuring water depth over the
anvil shaped rock when the water had stopped
flowing through the culvert.

This measurement was confirmed over several
years with repeated measurements. The top of
the anvil shaped rock is 7.87″ below the
bottom of the north culvert. For practical
work, the value of 8″ has been used.

Note that imperial units are used in this section
as they are the most familiar to those
discussing the subject in 2008.

The spring level in 2008 was the highest
recorded since 1995 and it almost filled the 36″
diameter culverts. If the water level had been
5″ higher, it would have taken the road out. If
water levels had been consistently higher in the
spring in the past, it is reasonable to assume
that the culverts would have been replaced with
larger ones, or another culvert would have been
added. The culverts would have been changed
because the risk of losing the township road and
stranding the permanent residents on Hardwood
Ridge Rd would be too high. This is probably
what forced the change from the original 24″
culverts to the 36″ culverts.

Residents remember photos taken of kids sitting
on the large shoal rock off Marys Island in the
past that would indicate that water was probably
lower than the recorded lows since 1995. The
top of this large shoal rock is 16″ above the
bottom of the present 36″ culverts. In summers
when the water level was below the culvert
bottom, that would have indicated about 16″ or
so was showing. Was that typical for levels in
the past? We don’t know.

We also have an air photo taken August 11,
1934 (A4551-24) from the collection of the
National Air Photo Library that provides an
indication of what the water level was at the
time the photo was taken, and a scan of part of
that photo has been included in this paper.

What can we
conclude from the air photo?
Vegetation shows up as medium gray. Water
looking down from overhead shows up a darker
gray to black, although reflections from the sun
could show it light gray to white. Marshy and
weedy areas show up as a lighter shades of gray.
Rocks, sand, very shallow water, and hard
shoreline show up light gray to white. The
shoreline usually shows up as quite a sharp
contrast between medium gray vegetation and
the darker water colour. Shallow areas may be a
lighter gray or white.

One indicator of water level at the particular
time that the air photo was taken is the shoal
off Mary’s Island. We can safely assume that it
has not changed much in the last 100 years. If
the tip of the big shoal rock were showing, it
would indicate a certain level. If all of the rock
were showing, it indicate another lower level.
If the whole shoal were showing, that would be
another level again. Once you reach that
conclusion you can go out to the shoal rock
area, do some measurements and reach some
conclusions.

It turns out that the shoal is an irregular
elliptical shape about 30 feet long in the east-west orientation and about 20′ across with the
big shoal rock on the western end at about mid
centre of the ellipse. The shoal falls off from
the centre to the edges of the shoal.

On August 11, 1934 there is a white area
showing where the shoal is located which
would indicate that the shoal was at or near the
surface. There is a light gray area around it
which would probably indicate shallow areas
around it. This would lead to the conclusion
that the water level could have been from as
much as 10 to 15″ below the present 36″
culvert bottom. The range is because it is
uncertain how much of the rocks just below the
surface would show through a few inches of
water. On that date in 1934 the water was low
enough to have the shoal rocks showing.

Of significance in the air photo is that there is
no vegetation on the shoal – it would be darker.
The absence of vegetation indicates that the
shoal was submerged for at least part of the
year.

The higher fall levels is shown as well in a
1930s to 1940s photo of Purdons Beach in the
Fall. (Note wearing clothes, no leaves on the
tree, and leaves on the ground. The car is a
1934 Dodge.) The first cabin were built by Joe
Purdom in 1934. The water level and shoreline
appear much the same as today. 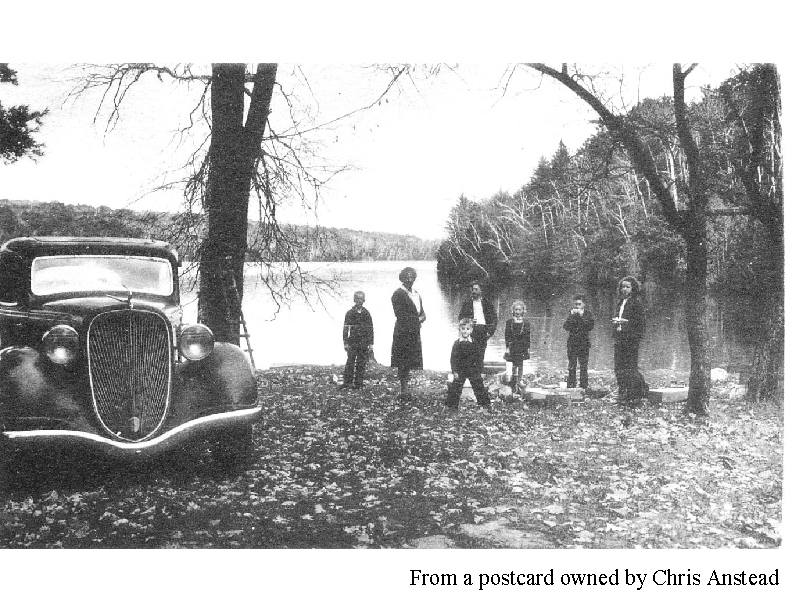 The Lake
Association has tried to obtain
additional information to understand past lake
levels and variations. The group of six large
unique shaped rocks in the channel to the east of
the islands also help to understand depths at
various times in the past

A drawing of the rocks has been included.

Only the large 6′ square top is showing which
probably indicates that the level at that time
between 8″ to 16″ below that present culvert
bottom. Like the shoal estimate, it is difficult to
say how much rocks just below the surface
would show up as whitish in the photo. By the
way the other whitish areas around the islands
are rocks showing or just below the surface.
They are there today. The darker areas are
aquatic vegetation.  In contrast, in August
2008 there was 14 inches of water over the
large rock. Because of the location of these
rocks, and the risk to boaters, these rocks are
now marked by a property owner with a buoy
during the summer season.

Please send your cheque to our Treasurer at the
address below. Make cheques payable to the
Patterson Lake Association. :Receipts will be
sent out in Newsletters.

This Newsletter was written by Lorne
Bowerman. As usual, Connie did the proof
reading and polishing Comments, suggestions,
or articles are welcome.