Patterson Lake is a headwater lake situated in the Township of Lanark
Highlands in Eastern Ontario. Patterson Lake is part the Mississippi River
drainage system that empties into the Ottawa River. The GPS coordinates of
the centre of the lake are N 45°00’25.7 W 76°31’37.3

Most of the water for
the lake comes from the forested drainage area around it, and from a
number of freshwater springs. Because there is no significant agriculture or
industry in the watershed, the lake is essentially unpolluted.

The Lake in on the edge of the Canadian Shield and has a mixture of both limestone/marble and granite
on or just below the surface. There are pockets of limestone/marble mud
around the lake and in the entrance to the outlet creek, Fairs Creek.
This mud was probably leftover from the last ice age.

The lake has a maximum depth in the central area of 15.8 metres.
Because of the irregular shape of the lake, there is a shoreline of 11.27 kilometres. The elevation above
sea level is 200.86 metres. The eastern section of the lake and the southern bays are very shallow, ranging at high
water from one to two metres in depth. About half of the shore is bedrock. The eastern end of the lake and the southern bays are wetlands and according to surveys of fish and vegetation done at various times, is pike breeding habitat, as well as habitat for a number of other wetland species. The wetlands and beaver activity have historically served to buffer extreme water level changes, prolonging the period of flow out the outlet late into the summer in normal years before the stream dries up. The shallow areas of the lake have weed growth throughout the year and historic maps show that this is fish habitat for several species. The forest surrounding
the Lake is mixed hardwoods with white pines. Most of the shore is natural.

Around the lake are six different road areas that for the most part not connected. One cannot
drive around the lake on the lake roads. The two drawings below provide the layout of the areas and then
then with the concessions. 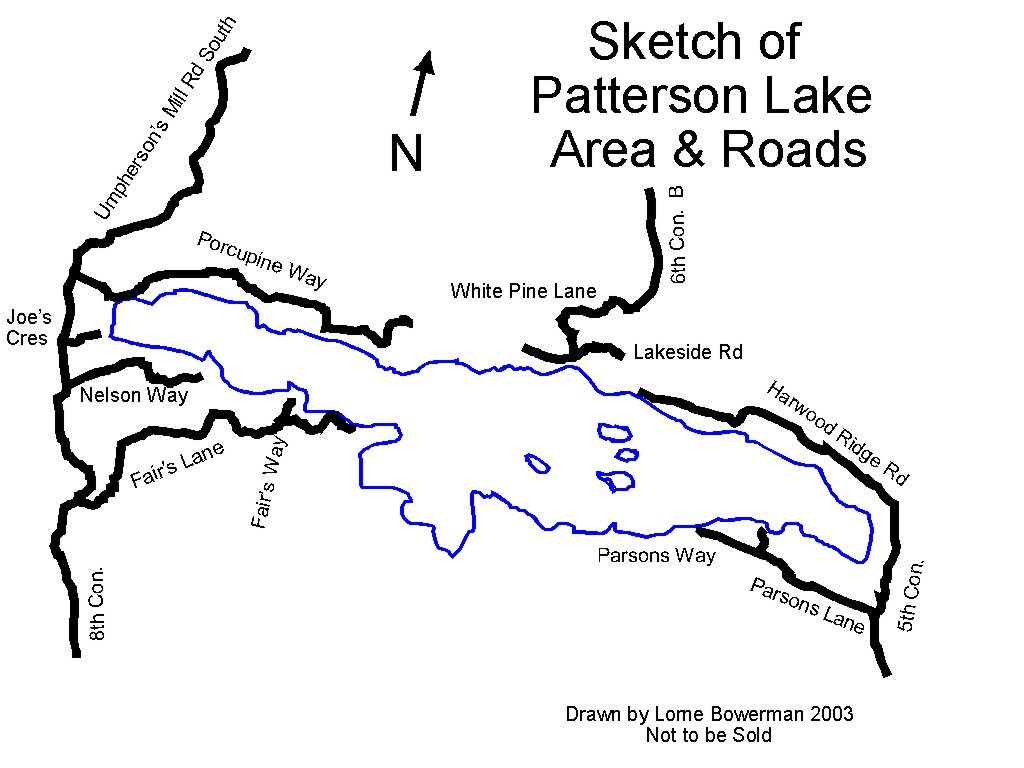 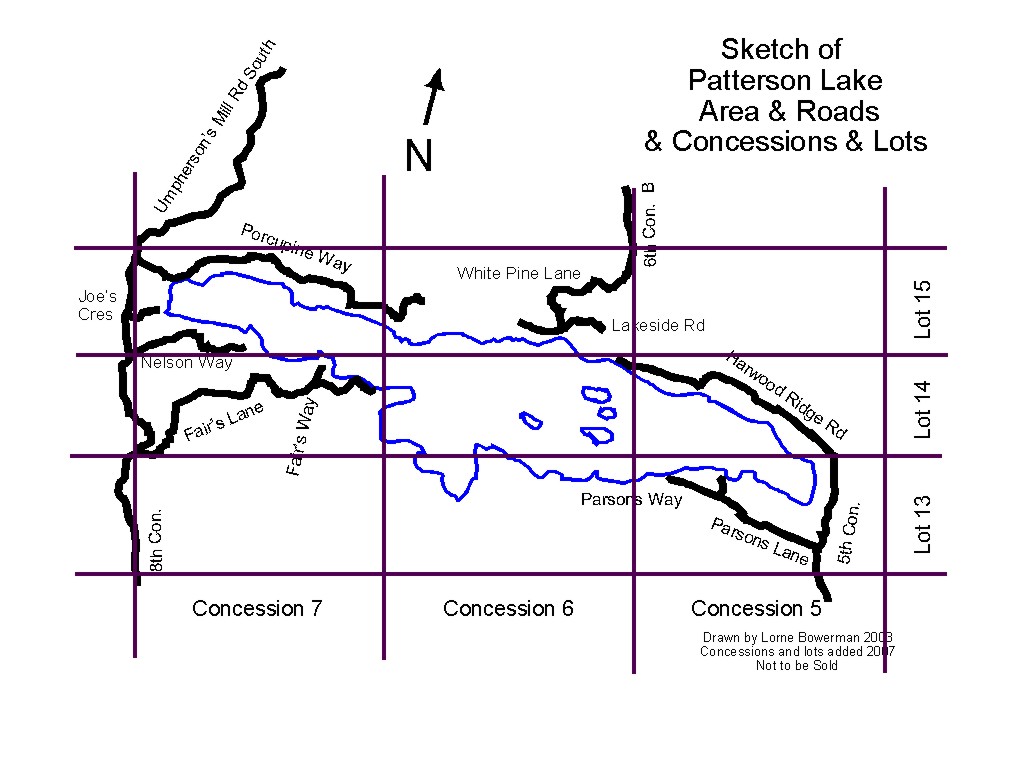 According to surveys by Watershed Watch, the water quality in Patterson Lake is good.
It has few nutrents which would make it turbid or contribute to organic pollution.
The readings for the key nutrient which is the indicator for contamination (phosphorous)
are low, and the algae levels are low to moderate. The latest Watershed Watch reports from the
Mississippi Valley Conservation are linked under the Lake Data button.

The lake water is slightly alkaline with a pH of 8.3, first recorded in 1969 and
confirmed in lake testing in 2007.

Testing in 2005 to 2009 by MVC indicated that the lake has not been invaded by
the zebra mussels nor the spiny water flea.

The lake inventory shows that a number species are found in Patterson Lake.
The surveys from the Mississippi Valley Conservation (MVC) and the Ministry of
Natural Resouces (MNR) over the years found the
following species in the lake: Smallmouth Bass, Bluegill, Yellow Perch, Pickerel, Northern Pike, Rock Bass, and Pumpkin seed (Sunfish).
These have been consistently listed since the 1960s.

The most famous part of the local area is the Purdon Conservation Centre
located at the western end of the lake. The Centre is home to thousands of
Showy Lady Slippers growing vigorously in a fen. Each June, the orchids provide
a show attracting visitors from throughout Eastern Ontario.

With thanks to Ted Manning, Lorne Bowerman, MNR, and MVC.