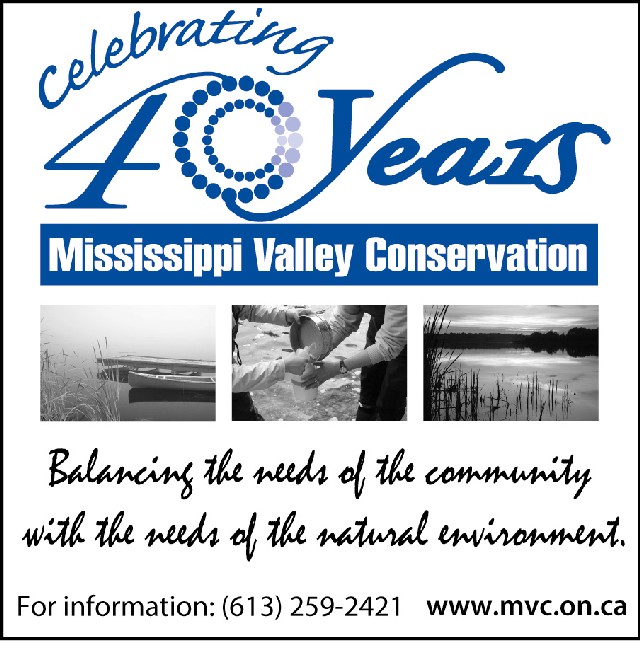 We start this newsletter with a salute to the
Mississippi Valley Conservation as it
celebrates it 40th year of service. They are a
treasured resource in our community.

The history and development of the Patterson
Lake area was researched and written by
Lorne Bowerman for inclusion in the Lake
Management Plan. Parts of it will be used in
the newsletters as there is much general
interest in the subject. The next newsletter
will include early European settlement and
why we are called Patterson Lake.

Included in this newsletter as well are the lists
of common flora and fauna for the Patterson
Lake area. The uncommon, sparse, and rare
species of flora as collected by David White
will be included in the next newsletter.
(http://www.lanarkflora.com/)

History of the Patterson Lake Area

This first section outlines the history of the
Patterson Lake area from just after the last ice
age to the present. The website references
are listed as links because these may change
and the Patterson Lake Association of Lanark
Highlands has no control over them. They
were active websites when this document was
written in 2008.

Patterson Lake lies in the area of southern
Ontario that was once covered by salt water
called the Champlain Sea. The Champlain
Sea was a temporary inlet of the Atlantic
Ocean, created by the retreating glaciers
during the close of the last ice age. The Sea
covered parts of Ontario, Quebec, Vermont,
and New York. It was bounded on the west
by the Madawaska highlands and Frontenac
arch, and in the south by the Adirondack
highlands and Appalachian highlands. The
Laurentian highlands formed the northern
boundary.

The weight of the mass of ice from the
continental ice sheets depressed the rock
beneath these areas over millennia. While
the areas were depressed, they were below
sea level and when the glaciers retreated
gradually, they were flooded with sea water.

The sea lasted from about 13,000 years ago to
about 10,000 years ago and was continuously
shrinking during that time, since the
rebounding continent was slowly rising above
sea level. The retreating glaciers fed the Sea
during that time, making it more brackish
than typical seawater. It is estimated that the
sea was as much as 150 meters above the
level of today’s Saint Lawrence and Ottawa
Rivers. Further information on the
Champlain Sea and fossil evidence can be
found at

As the land rebounded, the flora and fauna
from the neighbouring areas gradually moved
into the new area to the extent that they could
adapt to the soil and climatic conditions.

Dalhousie Township and thus Patterson Lake
lies within the area claimed by the
Algonquins. Historical evidence indicates that
the Algonquins over time have occupied
portions of the lands of the Ottawa River
watershed and travelled through surrounding
territory as a hunting and gathering society.
The Algonquins assert that the Algonquins of
Ontario never surrendered its territory by
treaty, sale, or conquest and have made such
claims since 1772.

Larry McDermott, the former Mayor of
Lanark Highlands is an Algonquin and part of
Algonquin claim of the land. An April 22,
2005 article by Matt Ross in Indian Country
Today stated “Currently McDermott is
involved in land claims for the Algonquin that
encompass 8.9 million acres in eastern
Ontario, or about 14,000 square miles,
overlapping all of the nation’s capital. While
he said negotiations would only involve
Crown (public) lands and not private
property, the enormity of such a claim
demonstrates how this area was never
negotiated originally.”

The anecdotal evidence of aboriginal
occupation of Patterson Lake is that an island
in the lake is called Marys Island. Mary is
reported to have been an aboriginal living on
the island at the same time (circa 1825) that
Archie Patterson homesteaded the area just
south of the bay on the south side (Concession
6, Lot 13W). Mary is also reported to be
buried south of the lake. There is no anecdotal
evidence of aboriginal artifacts being found in
or around Patterson Lake.

A township in Southern Ontario is usually
rectangular in shape, unless it borders a major
river or lake. Townships are divided into
concessions. Each concession is a strip of
land one and one-quarter miles wide.
Concessions can run in any direction and are
usually separated by a road. Concessions
were numbered with Roman Numerals (V,
VI, etc), although the practice has fallen into
disuse and the most used system now is
Arabic number (5, 6, etc.) When concession
roads do not run the length or width of the
township usually because of water, they are
labeled with letters (A, B, etc). A gore is a
part of a township that does not fit into the
regular shape, because the earth is round and
the surveys are squares.

Concessions are divided into lots that use
Arabic numbers (3, 4, etc). Originally lots
were 200 acres, which could then be easily
divided into parcels of 100 acres. The lots ran
parallel to the road. The 100 acre farms
were common in southern Ontario as it was
the amount of land that could be tilled by one
man usually with a team of horses. The early
farming settlers harvested the timber to build
their homes and barns. When the work was
too much for one man to do, such as raising a
barn, the community came together for a
work bee.

The Township of Dalhousie was surveyed by
Captain Rueben Sherwood, UEL, about 1820.
He laid out the standard square layout of
concessions running roughly east and west,
and lots running roughly north and south.

The story continues in the next Newsletter.

These lists are compiled as a starting point
for refining and expansion, and as a baseline
of what was here when the Lake Management
Plan was made in 2008 – 2010.

The lists are by no means extensive and
mostly reflect what an ordinary person might
know about the surrounding nature. However,
we are very fortunate to have a list of rare,
uncommon, and sparse plants from David
White, the author of Plants of Lanark County.

The most difficult list of all to agree on is the
list of fish. The local names of some species
overlap the names of other species. It is very
hard to obtain a definitive common name so
the species name has been included. A list of
common local names has been included. The
second most difficult, because of local names,
is the trees, which is surprising. There is little
difficulty in agreement on the mammals and
the birds, probably because of good field
guides for these animals.

The ten most common trees:

The twelve most common aquatic plants:

The ten most common fish:

Local Names of some speciies:

The ten most common birds:

The eight most common mammals:

The three most common snakes:

The two most common turtles:

It should come as no surprise that the lake was
very high this year. With almost record snow
levels during the winter, we all expected it.

What we didn’t expect was the ease with
which the snow melted and ran, or melted and
went into the ground, or evaporated in the
warm sun. That saved the day for many areas.

The lake level was nearly 31″ above the
bottom of the northern culvert, which is our
reference point. There is no drainage from the
lake if the lake falls below the bottom of the
north culvert.

Now if you know that our two culverts are 36″
in diameter, you will realize that the lake was
really high.

If the water had filled the culvert to the top,
usually it starts flowing over the road and the
road washes out. That happens within hours.
With the force of the lake level behind it, it
usually washes out a gully of about two feet
before it stops.

But it never happened. It was close. And
some lake residents reported the township had
dumped gravel along the side to reinforce the
road. As we get around to visiting again, we
will swap some good stories – How high was
it? Well it was so high that …

We borrowed a good idea from another lake
association and produced a list of emergency
and non emergency phone numbers for use at
Patterson Lake.

A good place to put the list would be on the
fridge. Another place would be near a phone.
Make sure that you write the civic number of
your property (eg. 151 Lakeside Rd) so it can
be available to everyone, including guests, in
times of emergency.

If you have any suggestion regarding adding
to or deleting from the list, please let us
know. We plan to produce another one when
changes require it.

The 2007-2008 membership dues were set at
$20 per property owner. If you have not paid
the dues for this year, we would really
appreciate it.

Please send your cheque to our Treasurer: